The History of MCS

Motion Control Suspension (MCS) has proven to be the evolution of premium Motorsport damper systems. Our team is continuously developing and refining our damper technology that is vastly different than other manufacturers, developed through hands-on involvement in GT and Touring Car racing.

While our roots are in the highest levels of professional sports car racing, our products excel in all environments, from enthusiastic street driving to auto-cross, track days, to club racing and far beyond. Our dampers are produced from the best materials available. We have created one of the most advanced, reliable and race winning suspension systems in the market today. Our team is proud to offer you these new systems, our proven worldwide expertise and the best customer service in the industry.

Over the past 28 years, we’ve had quite the journey and have accomplished monumental tasks in Motorsport. Scroll through and enjoy photos of our journey leading up to the creation of MCS, and the milestones achieved along the way.

MCS is much more than just a great product. Our group has worked together over the last two decades, providing you with unparalleled dampers, support and service. We have many years of practical racing experience on and off the track, extensive knowledge of vehicle dynamics, an understanding of driver expectations and needs, an unblinking eye for detail and the motivation and desire to constantly achieve more. We are a company fueled by the success our products achieve in your hands. Our customer support is valued as the best in the industry, which we feel is the only level that allows us to support your efforts, make you quicker, and share our joy of winning with you.

Manufactured in the USA

Motion Control Suspension (MCS) is a US based company with its headquarters in Atlanta, Georgia USA. Our damper systems are designed, innovated, and prototyped in this facility. Additionally, each damper is hand assembled, dyno-tested, and serviced/repaired on-site.

The backbone of Motion Control Suspension. 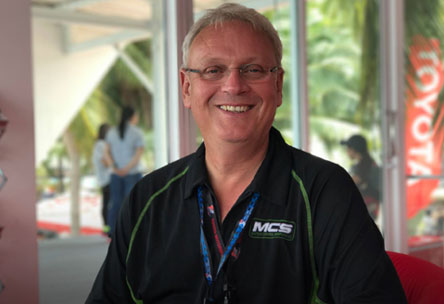 Born in the Netherlands, Jerome has been surrounded by racing since his childhood. As a child, Jerome dreamed of being involved with the GT Endurance and Touring Cars that he watched. Armed with a mechanical engineering degree, Jerome entered the suspension industry in 1990. Over the following 28 years, Jerome has been building, designing, and servicing dampers for notable teams such as Alfa Corse, PTG, and GM in ALMS, Trans-Am, DTM, World GT Championship, and others.

Jerome’s Motorsport resume includes the design of full racing product lines for other notable racing damper companies, and racing development for factory efforts from BMW, Porsche, Oreca, and others, resulting in over 100 European, Asian and US Championships and countless race wins, including 24 Hours of LeMans and the Nurburgring 24. Jerome’s work has also won FIA World GT, World Touring Car, World Sportscar, and a broad range of European and North American GT and Touring Car championships. Jerome’s drive to succeed is obvious in the daily operations and products of MCS.

With 26 years of experience in the performance shock industry, Lex is a fixture at professional, amateur, and club race events across North America. Having worked with four different respected manufacturers during this time both in sales and hands-on technical roles, he has a full understanding of the diverse range of products and technology found in the damper market. Additionally, Lex has successfully supported championship-winning professional teams, amateur racers, and private individuals as a technical specialist. 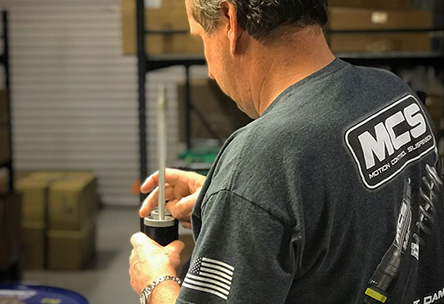 As an automotive industry professional for 38 years, Kent’s background is incredibly diverse. With experience spanning the range of professional mechanic, shop owner, machinist, fabricator, designer, and data specialist, his primary focus for 24 years has been hydraulics – fundamental to the operation of a suspension damper. Kent’s racing experience includes drag cars, sand drags, dirt late models, modifieds, and sportscar racing with GT and Touring Car teams capped by championships in both IMSA and World Challenge. As a builder, prototype, and designer at MCS, Kent is able to design and execute to a finished product at a level only someone with a full understanding of the system can.